Baby Got Back Issues

I covered the BFI London Film Festival last month, which I really should have been posting about as it was happening, but it would be disingenuous to suggest this blog has ever been anything but erratic at best. As ever, I intend to change that, but actually doing things has taken priority over writing about them recently. Which is how it should be, but self-improvement (i.e. relearning the blog discipline I once possessed) is ever the goal.

Anyway, all of my festival reviews are handily collected here, via Nerdly. I may post write-ups of some of my favourites on here, which included a rollicking trans prostitute screwball comedy and a tar-black satire about the perils of implementing social mobility.

The whole experience was thrilling and exhausting in equal measure, and though I’m grateful for the privilege of being able to attend LFF in a critical capacity, I was also working a full-time job at the same time and suffered something of a mental burnout by the festival’s end which I’m just now recovering from.

“Oh, the poor little boy watched too many films and now he needs a good lie down.” Well, yes. But in my defence, I did watch a lot of them.

Speaking of festivals I covered but forgot to mention on here, August 2015 saw me attend my first Frightfest! Only a weekend long and situated in Leicester Square (as opposed to traipsing up and down the West End and rocketing across the Thames between screens), the Film4-run horror festival was ironically a much more relaxed experience than LFF, due in part to being attended by friends new and old, not to mention the myriad delightful genre fans the weekend brings out of the woodwork. Can’t wait for next year. You can read my reviews of Over Your Dead Body (the first of two Takashi Miike films I’ve reviewed at London film festivals in 2015, funnily enough), Jeruzalem, Scherzo Diabolico, Awaiting and the bafflingly enthralling Aaaaaaaaah!, which was probably my standout film of the weekend.

I also saw the very silly ’80s nostalgia-fest Turbo Kid and took the opportunity to recreate one of the film’s many Mad Max-on-a-BMX scenes, as evidenced by this bitchin’ pic: 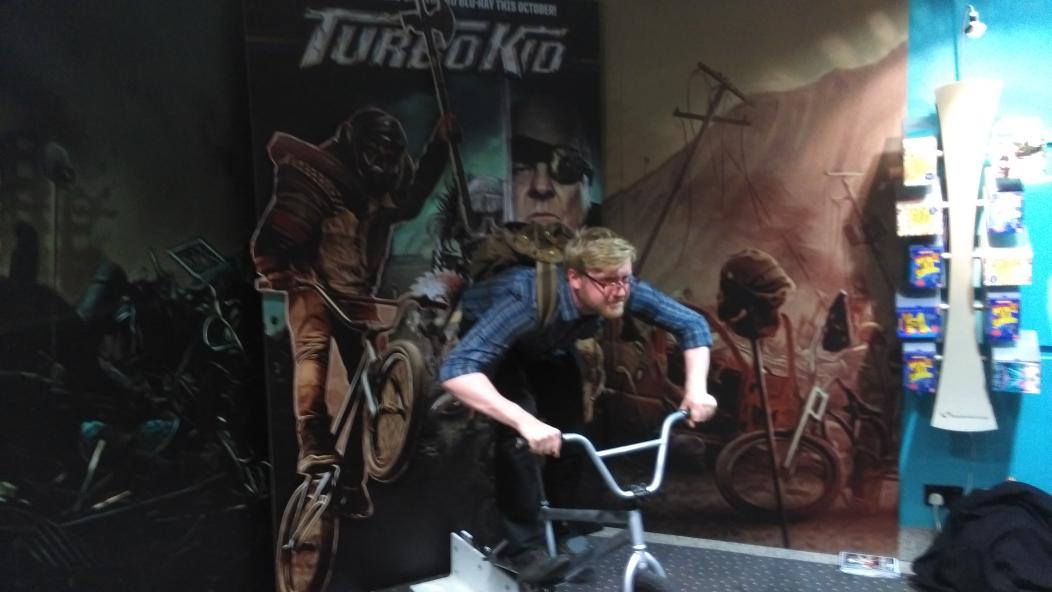 The owner of that tweet (but can you really own a tweet, man?) is none other than Jack Kirby, writer of the all-ages extraterrestrial sports comic Alien In The Outfield. The long-awaited third issue is due to be launched at this weekend’s Thought Bubble Festival by Jack and artist Mat Barnett – talented fellas and good friends both. I’ll also be there covering the con for Nerdly in…some capacity or another. It will involve some combination of words and pictures. (I’m nothing if not a forward planner.) It will probably be dissimilar to my previous coverage of Thought Bubble in 2013, which was a rambling series of panel summaries and awkward encounters with comics professionals.

Anyway, I was lucky enough to be granted a sneak preview of issue #3 (read: handed a proof copy when they came in as we all work in the same office) and I am happy to announce that it’s Barnett & Kirby’s best work yet. Humour, sweetness, romance and cliffhangers abound! If that sounds like your bag, you can find the book (and the first two issues if you don’t already have them) and its creators at table 53 in the Royal Armouries Hall or, if you can’t make it, buy it online for whatever price you like! Here’s the wonderfully evocative cover for the third issue by the marvelous Meryl Trussler:

Jack recently wrote a blog post on the development of issue #3 and some exciting plans he and Mat have for the future. If you have any interest in the creative process and the struggles of self-publishing comics, it’s definitely worth a read.

I have more things to share, but that’s probably enough for now. Watch @arkmallen for con updates (which will largely consist of amazing cosplay, I’m sure) and, um, keep watching the skies.

A Gothic Chick Who Likes To Cook Vegan Yummies

my thoughts on film, games, anime, and more

Showcasing the best of female talent. Filmmakers and Screenwriters

On the Screen Reviews

Blabbering, brazen, wannabee badass with a wicked case of wanderlust

None of it is real

What Inspires Your Writing?

A blog dedicated to writers...and the people, places, and things that spark their creativity

Alien in the Outfield